1928 - Leo had graduated high school and was running an amateur radio station while building amplifiers and public address systems. 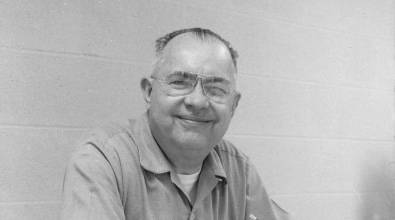 1946 - Leo renamed his business to the Fender Electric Instruments Company. He turned his radio shop over to Dale Hyatt so he could concentrate on building instruments. By 1949 Fenderguitars and amps were firmly established in the music industry.

1950 - During the spring of this year, the Fender Electric Instruments Company introduced a single and dual pickup solid body electric guitar. It was named the Esquire, about 50 were made, and were not fitted with a truss rod. Orders were being placed, though before production started, the instrument had been modified with an adjustable neck and renamed the Broadcaster. It was renamed again a year later to the Telecaster. The rename was done due to a conflict with Gretch Broadkaster drums.

1951 - Leo closed his repair shop to focus entirely on building solid body instruments, which by late 1951 included the first electric bass. The Precision bass is one of the most popular bass designs to this day. Leo needed an amp to run it through though, so he built the Bassman amp. 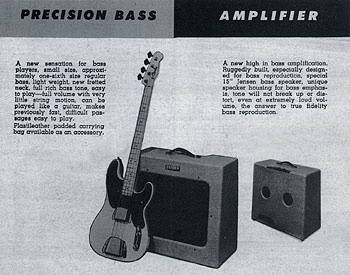 1954 - This was the year the Stratocaster was introduced. The most popular guitar ever made and copied. It made the Fender company worth millions and made Leo an icon in the music world.

1956 - Below is a patent poster for the Stratocaster used to advertise the new features.

From it’s release in 1954, the strat had many changes made from year to year, including varying amounts of contouring on the body, materials used for the control knobs, pickguard, headstock shape, serial number placement, etc. 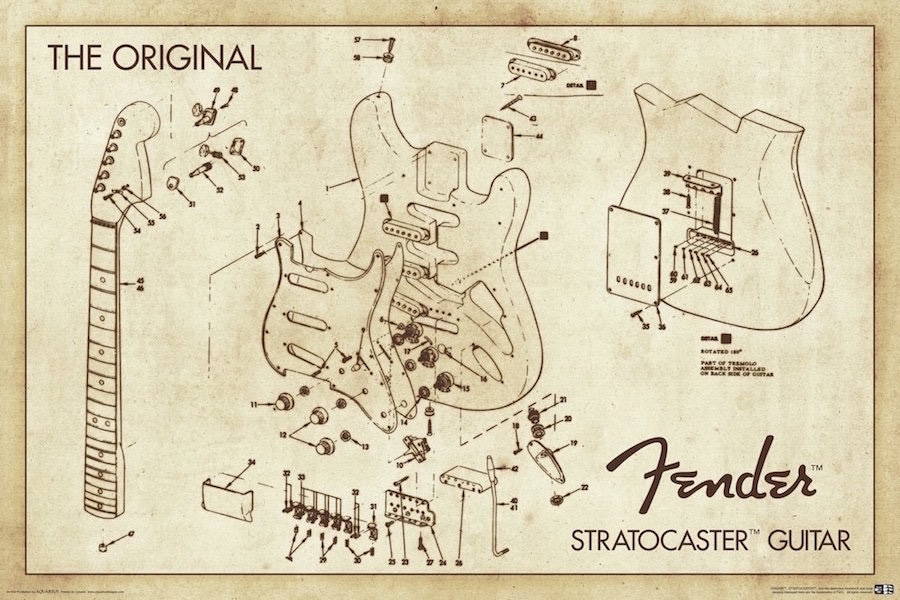 1964 - Fender begin production of their acoustic guitars. Fender at this point now had over 600 employees, 500 of them in manufacturing. At age 55, Leo suffered health problems and offered to sell Fender Electric Instruments to his parter in Fender Sales, Donald Randall,for $1.5 million. Randoll not having the resources to purchase the company himself, agreed to find another buyer. In August the Fender Mustang was introduced

1966 - Forest White was demoted from vice-president to plantmanager after the takeover. He quit less than two years later over a dispute regarding the quality of an amplifier CBS planned on producing. 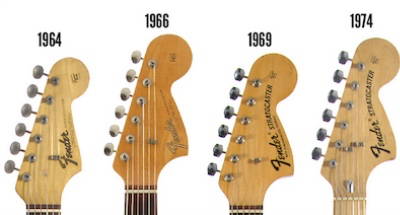 1969 - Donald Randall, now vice-president and general manager under CBS also left the company. His departure was due to corporate politics and concerns over quality. Many other long term employees felt quality was taking a back seat since CBS took over.

1975 - Interesting extract from Fender's 'Guitarchive' Article THE STRATOCASTER IN THE 1970S, PART II

It was strange. By the start of 1975, the Stratocaster was at its most popular—more and more artists were playing them and more people than ever were buying them, yet the new ones weren’t nearly as good as the older ones. Plenty were decent enough instruments, but few were great instruments. Fender couldn’t make Stratocasters fast enough in the mid ’70s, and that was undoubtedly the problem, because in the rush to produce more and more of them under the corporate bureaucracy of CBS, corners were cut and ill-advised design decisions were made. 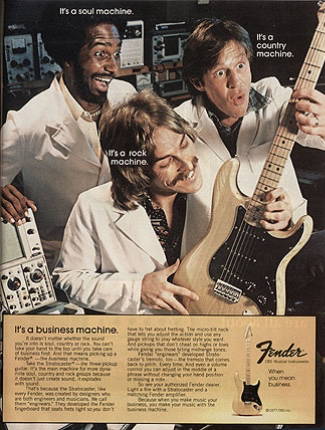 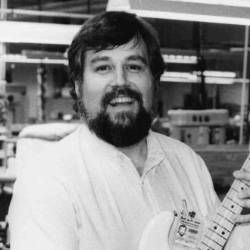 We were brought in to kind of turn the reputation of Fender around, and to get it so it was making money again. It was starting to lose money, and at that point in time everybody hated Fender. We thought we knew how bad it was. We took for granted that they could make Stratocasters and Telecasters the way they used to make them, but we were wrong. So many things had changed in the plant.

1985 - On the 5th of March, CBS sells up to the management group run by William Schultz for $12.5 million. The company name was changed to Fender Musical Instruments Corporation. However, the sale did not include many Fender patents, machinery and nor the Fullerton facility, which was sold separately. As a result, no U.S production was taking place. Only Japanese models appeared in the 1985 catalogue. At this point after the sale. Fender Musical Instruments Corp. were roughly $11 million in debt. 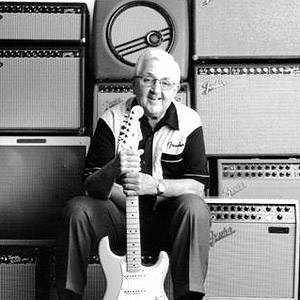 Fender’s first modern-era CEO, William Schultz, served as the company’s president during its final years under CBS in the early 1980s. He and a small group of investors bought Fender from CBS in 1985, whereupon he engineered the creation of the modern Fender corporation.

1987 - Two years after U.S production was shut down, Fender open their custom shop in Corona California. This same year the American Standard Strat is released. 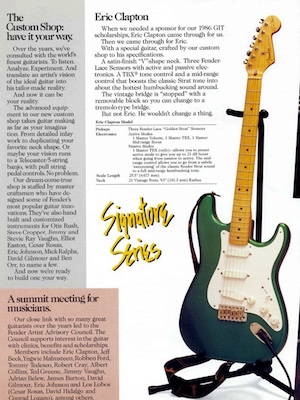 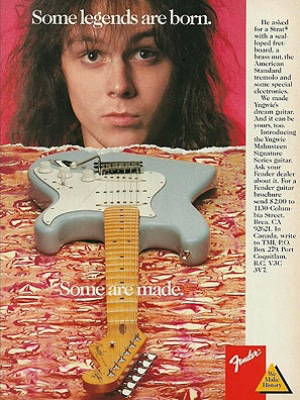 1988 ad for the Yngwie Malmsteen Stratocaster

1991 - Fender move their headquarters in Corona to Arizona. Over seeing all their facilities, now on a global scale. Including, the U.S, Mexico, Japan, France, Korea, Chine, the UK and Germany.

Leo Fender passed away on a rainy day in March 1991. His private workshop at G&L remains largely untouched to this day. 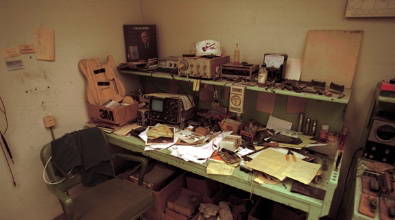 1996 - Production of Fender guitars is estimated at 50,000 guitars a year. The company at this point is worth approximately $250 million.

1998 - A new state of the art 177,000 square foot facility is built in Corona, California. Built on a nineteen acre site, which at this time can manufacture 350 guitars per day.

2004 - The 50th Anniversary strat is released, replicating the original 1954 design.

2007 - Leo Fender, Donald Randall, William Schultz and other key staff are en-ducted into the Fender Hall Of Fame. 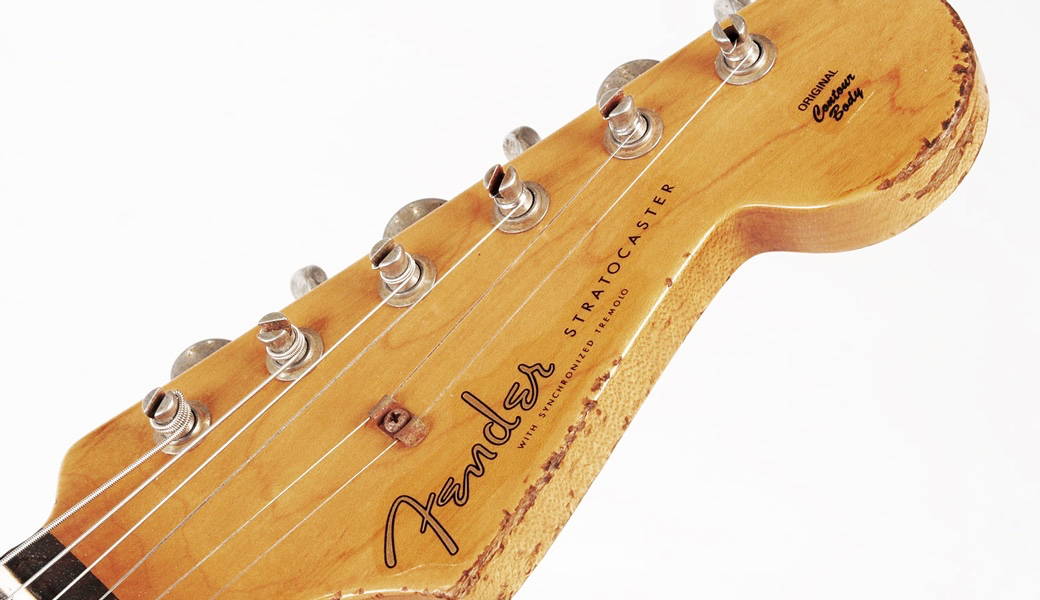