Strings do break from age or because of a flaw in the string but most string breakages are caused by a problem with the instrument. This is particularly noticeable if the string regularly breaks in the same place.

There are solutions for these common problems and will give you confidence in the instrument and most likely improve tuning stability.

Breakage at the bridge or saddle

Cause: Electric guitars will predominantly have metal saddles which can become corroded and slotted by wear. The string can catch on the burred edge causing a break or weakness to occur.

Solution: In order to remove the burr, sand the saddle with a couple of gauges of glass paper. I would normally use 1000-1250 and then use 1500-2000. If you have a Dremel you can buff the saddle using a chrome cleaner. We also highly recommend Big Bends Nut Sauce to lubricate the saddle and further reduce friction.

Note: when buffing or sanding gold or black saddles this will remove the colour. 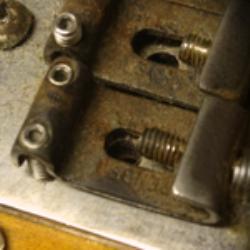 This causes the string to break down quickly if not break immediately. 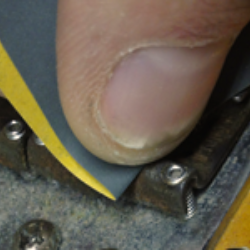 Buff with chrome cleaner and a Dremel if possible. 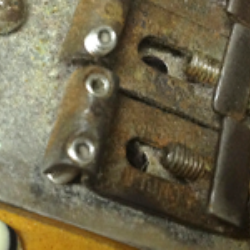 By cleaning this saddle the string is far less likely to break at this point.

Note: The customer requested the saddle was left to look old.

Cause: As with metal, a sharp edge can occur on a plastic or bone saddle causing string breakage. However, this is not the biggest cause of string breakage at the bridge. As the burr will naturally wear away quickly. It is more likely to be movement of the string over the saddle causing it to twist under tension. As the string is picked it rolls across the saddle and then back again. This puts a great deal of stress on the string core often making it snap the internal wire just leaving the wrap to uncoil.

Solution: If you are experiencing direct breaks on the saddle it is worth using mild sand paper to address any harsh edges where the string meets the saddle. With regards to the latter problem things can become a little more involved but often increasing the string gauge will add more tension and therefore cure the problem.

To fix the issue properly we need to increase the break angle, if possible, to combat the movement of the string. Ideally the angle should be more than 45 degrees. This is often easier said than done as some guitars have had the saddle greatly reduced to make the action lower.

The below images shows a Yamaha acoustic with this very problem. You can see there is no break angle and even at concert pitch the string can be lifted away from the saddle. We will be writing a full article on Break Angles with far more detail. 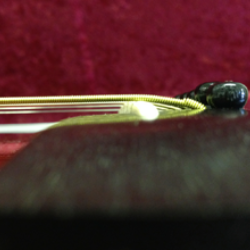 Very little break angle on to the saddle also causes problems with tone transfer and stability. 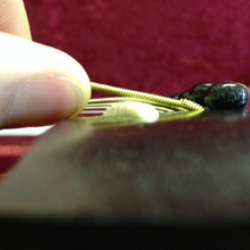 String Can Be Lifted

Even at full tension the string can be lifted with relative ease. 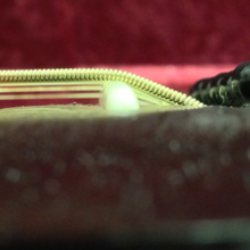 By increasing the break angle we no longer have this problem.

Cause: Another common problem is when the string breaks above the nut but not on the actual machine head. This is caused by the nut slots causing too much friction on the string as it passes through. You will often hear a ‘tinging’ sound as the string is tuned.

You may find the issue has been caused by increasing the gauge of string, dirt or rust trapped in the nut slot or being cut poorly in the first place. Increasingly we find guitarists are putting heavier strings on guitars in order to drop tune which the nut has not been cut for.

Solution: The nut slots need work in order to stop the excess friction. We use specific gauge files to go through the slots being careful not to increase the depth too much. These files are particularly necessary when increasing the gauge of string used.

Every single guitar we have on the bench has Big Bends Nut Sauce used on the nut and any other friction point. It is exceptional at stopping these problems in the vast majority of cases even without files. Only a small amount is needed and there is enough in a small 0.5cc tube to do 50 full setups. This will also help clean the slot and stop further build up of rust and dirt. 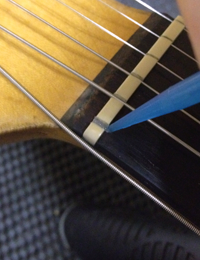 Breaking at the Machine Head

Cause: If a string is snapping at the machine head it is most likely cause by poor stringing technique. A lot of guitarists allow the string to overlap itself multiple times or even worse loop it back on itself to stop it slipping.

This causes the string to be at tension on an uneven surface which greatly reduces the life of the string and affects tuning stability. 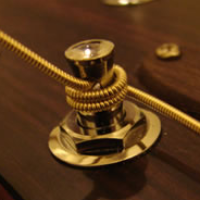 Solution: A string should never overlap itself and you do not need to tie a knot or loop the string back on itself.

Use a sensible amount of winding so the string has between 3 and 6 wraps around the machine head post. Usually 4-7cm will be a good guide. Ensure the end passing through the eye of the machine head passes over the top each time it goes around and keep tension on the string while winding.

Strings can break anywhere for a number of different reasons we have not mentioned. If you are breaking a string consistently in the same place you can usually identify a problem and fix it. Always look at the reason behind the breakage to ensure the guitar is reliable and that small problems do not escalate. The best way to avoid this is with regular Guitar Care and string replacement.