Looking After Your Hearing - Tinnitus Awareness

As gigging musicians, we are exposed to potentially dangerous volume regularly. You would think that we would look after our hearing. The reality is, many of us leave it far too late before we contemplate change or protection and the damage is irreparable. Please take a few minutes to read this article and share it.

There have been so many instances in my 15 years of music retail, teaching and gigging where musicians, guitarists in particular, talk about phenomenally small differences in 'tone'. For example, comparing the difference in the amount of nickel in fret wire or the sonic difference bone and ivory have as a nut on a guitar. Quite frankly, the difference is neglegable and yet these same musicians regularity bombard their ears with intense volume. It seems incredible to me, someone can care so much about 'tone' yet not realise their hearing will be radically different because of damage.

The problem is, hearing loss is very gradual. Some of the highly experienced musicians we know talk about particular bands or periods in their life where they think they received the most damage. Often these periods are 10-20 years previous and, in some cases, they are now requiring hearing aids for every day life.

There are 18,000 hairs in your ear, these are so tiny that all of them could fit on a pin head. The above image is a microscopic image of the inner ear hair cell. These hairs are moved by sound pressure waves which are interpreted into 'sound' by the brain. If there is a loud sound then they are scattered like Wheat during a gust of wind. Loud sounds create intense movement in these tiny hairs which causes damage over time.

It is also important to point out sound loss is applicable to particular frequencies experienced. If you subject your hearing to loud high frequency then this is going to result in a loss of hearing in this specific area. Certain genetics can also make some of us particularly susceptible to specific frequency loss. Unfortunately, this is usually very hard to identify until far too late.

When you subject yourself to loud sound pressure the hairs in your ears can be damaged. This can be likened to a wind storm over a wheat field.

If this storm happens once in a while, the wheat is allowed to regrow and return to full strength. On the other hand, if a storm occurs with no break then the wheat field is likely to be permanently damaged. The intensity of the storm will greatly affect the recovery of the field.

Exposing yours ears to more noise without a good rest window can cause greater damage to your hearing. 8-12 hours is probably enough but if you are still experiencing 'dullness' or 'ringing' then you really need to be extra careful. 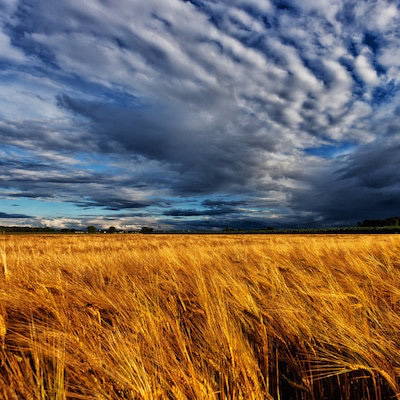 Lets be honest, playing live music with a full band quietly is very difficult and often lacks energy and sound. We know equipment often needs to be driven or played hard to achieve the desired sound. This is such a big subject there could (and probably is) a dissertation on every aspect of what I am mentioning below. Still food for thought..

There are a number of things we need to think about and change to avoid some damage. Giving yourself some distance from equipment where possible will make a big difference, the role off of sound pressure over a few metres is significant. Unfortunately, many musicians find themselves playing in tiny venues with no room for spreading out and are on top of their amps. With other equipment/musicians competing in your frequency area, you can find yourself battling to hear despite your close proximity to your own amp or monitor. I've found open back cabs and combos have helped me get a better sound in small venues. This is because a significant percentage of the sound comes out of the back giving you a more ambience.

Of course a drummer can't exactly get away from the kit but it is important to balance the band levels. Often this is more about the positioning of Bass, Guitar and Monitoring Amps.

Drummers will naturally setup cymbals at the other musicians shoulder/head height which can be very harsh on the ears, especially if you play regularly. This is even a problem for vocalists using in ear monitors (IEMs) as the cymbals are picked up by the vocalists microphones. Again, the cymbal frequencies are the same as the top end of a vocal or high notes of a guitar which means everyone is competing for the same sound space. This is difficult to avoid without boxing the drummer in with a Perspex sound shield! I promise you, this will be hugely insulting if you suggest it. However, if everybody can control their volume the drummer will most likely follow and in many cases be able to play far more dynamically.

Percussive instruments are the most damaging to your hearing. (Note: research is there less damage when heard at same level via IEMs)

Obviously a huge number of variables but, in general, a guitar frequency competes with most of the other instruments and vocals. This means your guitar tone is making it harder for the other members to hear themselves and vice versa. There's not really a solution to this but being aware of it can sometimes stop the spiralling of volume increases.

Turning up part way through the set

Avoid turning up after the 3rd song. This is astonishingly difficult to do. Your ears can naturally compress as you start playing and this often creates the feeling of wanting to turn up to restore dynamics. If you turn up it is almost guaranteed everyone will follow. It is often a comfort thing that makes us turn up a little bit when in truth we probably don’t need to. Due to the compression you will also find it is particularly difficult to turn the volume down again, so it is imperative you resist the temptation to turn up in the first place.

It's obvious that musicians are a unit when they play as a band but very often we can fight each other for space in the frequency ranges. Particularly, we are competing with the vocals. I have seen so many brilliant bands where you cannot hear the words of the singer. If you mixed a studio recording with the vocals way down in the mix you would consider it poor. I'm afraid we have to face it, despite our huge investment in musical instruments, both time and money, the vocals have to take priority in a live situation to have a good mix. The vocal level is the volume benchmark for the band, not the snare or guitar! If you can start this way around it can make the rest fall in to place much easier.

Dynamics are so critical for bands. Very often, we think we are being dynamic when the truth is we are not really achieving it. Time and time again you hear a singer belt out a chorus and right where the song drops to the verse the band continues to at the same volume while the singer mumbles there way through way down in the mix. This is actually really tiring for a singer and not particularly enjoyable. Taking a really solid step down in volume at points where the singer is in their 'chest' voice is critical to the dynamics. I'm not suggesting a 10% reduction here, it needs to be significant, half the volume, and the whole band needs to do it! There are bound to be exceptions but it is a very simple way to establish a dynamic band.

It's such an obvious thing to suggest you should drop out completely at points during some songs in a gig. I have seen so many gigs where the guitarist, bassist, drummer or keyboard player play right the way through every song and I have done this myself many times. Even when a drummer drops out there is often a high hat, bass drum or rim keeping things going or a guitarist is just playing softly for a bit. Drop out, actually do nothing! This will terrify drummers because they now rely on someone else to keep the beat but the reward for doing so is huge. When you come back in from nothing, it is far more significant.

How does this help your hearing?

By actively changing some of the above sections there will be a significant drop in the overall volume you are exposed to over a gig. This accumulative change at 2-3 gigs a week over years is massive. Also, it costs nothing to do it and very often results in a better band sound.

The National Institute for Occupational Safety and Health (NIOSH), who research for safety in ‘working’ environments in the US, released some figures in 2002. They said that it would be safe to hear 85dB for 8 hours. For every 3dB increase the time should be halved. Therefore 100dB would only give you 15 minutes before damage can occur. 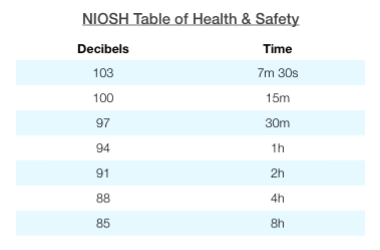 If a gigging musician was employed in the same way as a labourer, Health & Safety would not allow you to expose yourself to loud levels without significant hearing protection. Just look at the line 103dB for 7m 30s... a snare is approximately 110dB from 1 ft away! The difference is a musician needs their hearing to remain good and quite simply it won't stay that way at with exposure to high sound pressure levels.

Increase in Decibel vs Perceived Volume

How Decibels relate to Perceived Volume

10 Violins playing the same thing would be twice the perceived volume of 1 Violin but would be +10 dB which is 10 times the Sound Intensity.

My main focus of this article is obviously the welfare of musicians. However, our bands should also be responsible for the overall level they play at and consider the affect this will have on the crowds who watch us perform. Even a few dB change will make a difference.

This is a significant topic in itself and really needs another article to begin to talk about the huge benefits of IEMs and the systems that surround them. However, since this article is about protecting hearing, so it is absolutely crucial to say bad quality IEMs can cause serious hearing loss. There are poor copies on eBay and I have seen people use ordinary headphones. Cheap drivers can cause horrendous damage due to the micro distortions that occur with Low end drivers.

IEMs are expensive, but it is worth investigating properly. Don't sell yourself short when protecting your hearing. More on this soon..

Ear Plugs are a brilliant thing to use. They cut volume from 3-30 dB depending on the type. For many musicians there is a huge change to sound which they struggle to adjust to. Many of the cheaper ear plugs cut the volume but unevenly cut the frequencies, especially the higher frequency. This has the affect of a middly sound or lacking presence. However, as they are cheap it is always worth carrying some with you. You can also wear just one in the ear that faces the loudest parts of the band.

I have made plenty of mistakes throughout my career when it comes to performing and would be delighted to talk to you about gigging and volume problems you may be experiencing.

If you have any questions or experiences please put some comments below in the Disqus section.