The Tiny Terror changed the world of low wattage valve amps. There were plenty of other similar powered amps before Orange launched it but the tiny Terror was a revolution because it hit a price point, tone and wattage many guitarists were looking for.

In order to maintain this price point Orange took the bold decision to make the Tiny Terror in China. The factory is owned by Orange, which is necessary to give them the control they need over the consistency and quality of the product. It was a brave step for a company with such a rich “Made in the UK” heritage but, in our opinion, a stroke of genius none the less. There is no equivalent that comes close to the Tiny Terror at this price point. 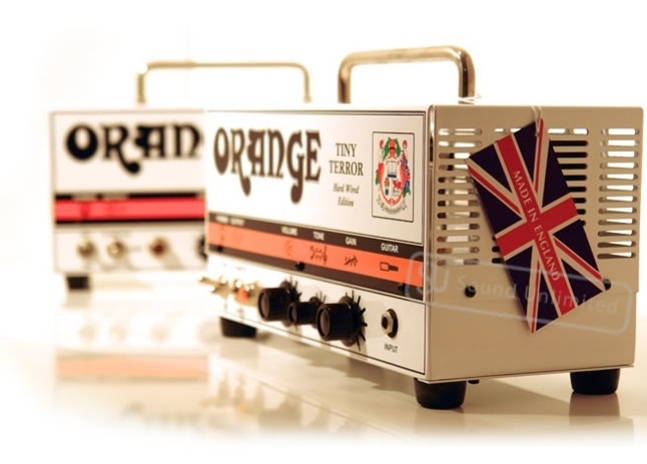 The fact that there is a Hard Wired Edition available, which is hand made in London, is something we have been eager to look in to.

The Tiny Terror is already an amazing product. Can the Hard Wired really be good enough to justify being nearly twice the price? We felt a test coming on… A “Tete a Tete” as they say in Yugoslavia (sometimes?).

Here is a list of the equipment used for this test.

Carl Martin Route Box - AB Switch to make sure we could change between the amps smoothly with no signal loss.

Planet Waves PW-SCS-05 - 2x 5ft Speaker Cables for the heads to connect to the PPC112 with excellent transparency. 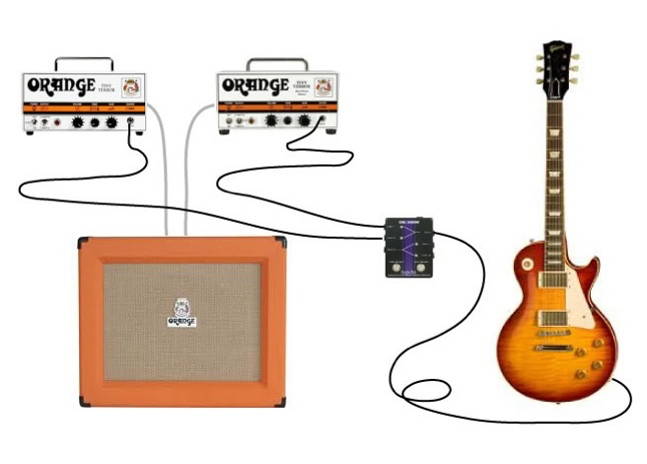 With this setup, the Route Box switches between the amps instantly and silently so I could hear the true difference.

With the amp setting to: 7 watts; Volume at 6; Tone rolled back to 4; the gain at 7 and using the bridge pickup of the Custom Shop ‘59 Les Paul. Orange has absolutely nailed the tone of this amp. The dynamics are amazing with huge control from the volume and tone pots of the guitar allowing you to shape your sound with your finger tips. The amp cleans up when you back of the volume and when rolling off the tone it fattens the sound without making it too muddy.

It is also extremely apparent how the guitar’s characteristics are distinctive through the sound of the Tiny Terror. If you change from a Strat to a Les Paul it is a very different amp but amazingly you can also hear an obvious difference in two more similar guitars, such as a PRS Custom 24 and a Les Paul.

The simplicity of the Tiny Terror is a huge part of its charm, with only three controls; Gain, Tone and Volume. The Gain control has a large amount of drive available and can push things up to a heavy rock level. It maintains a gravelly tone throughout the range slightly smoothing at around 8 when it saturates (depending on input level). The Tone control is neutral at 5 and adds Bass to the left and Treble to the right. The sound lends itself beautifully to Blues and Rock legends such as Jimmy Page, Eric Clapton, Paul Kossoff, Angus Young.. without any question, this is the target ‘audience’ for this amp.

In terms of volume the 7w and 15w settings offer home and small gig output with plenty of power to mic up for bigger venues. This is a loud amp for it’s size without having the need to be pushed to hear it’s characteristics and is ideal for studios and rehearsals. 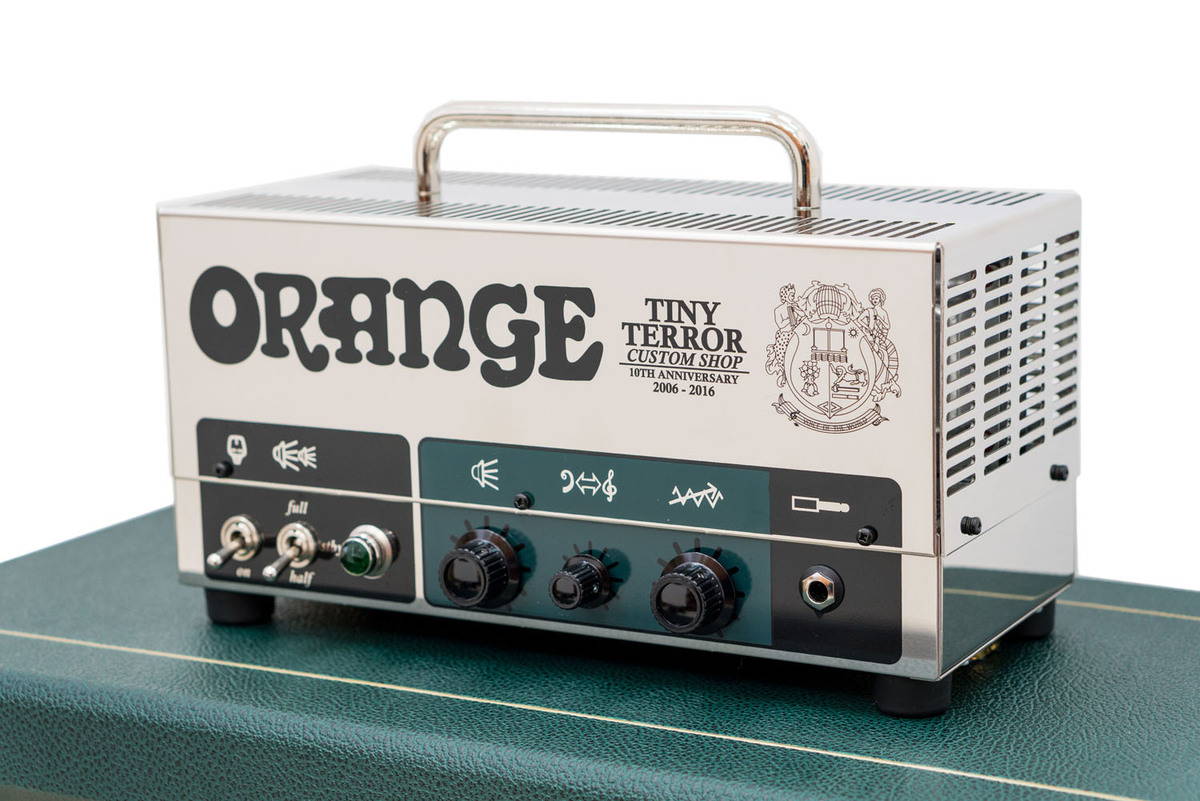 In 2016 Orange released the 10th Anniversary Limited Edition Head. Since dubbed the "Shiny Terror". We have now sold out of these but have a look here for more information. View Tiny Terror 10th Anniversary Edition

When setting the controls of both of the Terrors to the same setting I instantly noticed the difference in the quality of the pots with the hand wired version. The Hard Wired has a pleasant smooth resistance and an immediate feeling of very high quality. There are a few cosmetic differences such as the handle and the control knobs but they are, aesthetically, all but identical.

With all the settings the same on both amps a click of the Route Box revealed the difference in the British Hard Wired. I switched too and fro a bit to focus on the multitude of subtle differences; this wasn’t ever going to be “chalk and cheese”.

There is a noticeable difference with the overall sound of the Hard Wired. The width of the tone is richer, with more harmonics, clarity and depth. It is very recognisably still a Tiny Terror but the Hard Wired just has a ‘more’ of everything that makes the Tiny Terror a class leading valve amp.

It isn’t just noticeable from a playing point of view, others commented immediately on the difference without being able to put a finger on why. Sometimes, due to subjective nature of sound, something can just be ‘better’ or just sounds ‘bigger’.

I think there is an element of desirability and expectation because of this amp’s heritage but it is undoubtedly sonically superior. This isn’t testing two different amps aiming at the same market and price point. This is testing the same thing where one is made to have the right ‘price to tone ratio’ and the other is made just…‘right’… with absolutely no compromise.

Another bonus is that the Hard Wired Edition comes with a leather gig bag. It has the usual pocket on the front for the speaker lead and power cable.

The leather is soft and supple with the Orange logo embroidered on to the front. 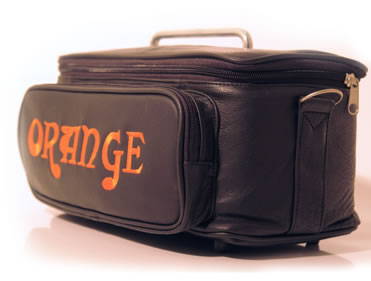 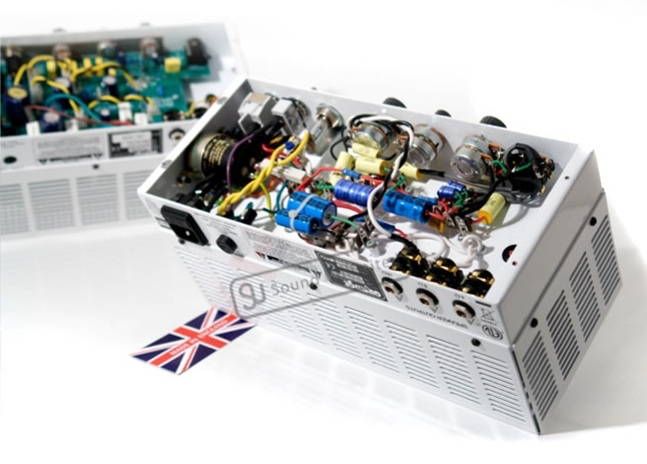 Now to the inside!

Having tested the difference in these amps sound we wanted to see how they compared internally and show you the componentry of these two great amps.

There is a significant difference in the grade of all of the materials throughout the Hard Wired Tiny Terror amp, which obviously contributes to the overall tonal differences.

We knew there was going to be a big difference but the pots alone are incredible. I mentioned previously that the Hard Wired' pots feel smoother and of better quality but now you can see a big reason for this in the picture below. 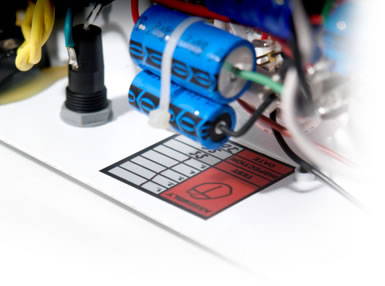 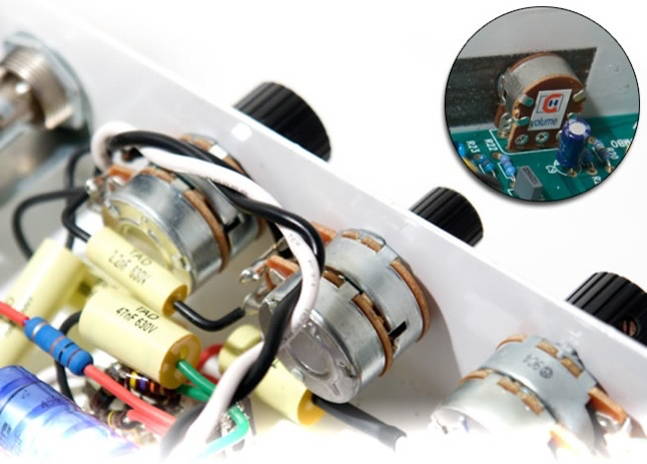 Everything is so neat and tidy inside the Hard Wired Edition which looks like a piece of art. This particular amp was made in the Orange factory in London on 30th June 2010. The Test and Inspection were carried out and initialled by SS.

In the Hard Wired Edition beats the heart of a classic British amp, one that is testament to Orange’s background and their attention to detail.

If I were to use an analogy to describe how I feel about these two valve amps, I would do it with cars. It’s like choosing between an Aston Martin and a Jaguar (If only!). If money was no object, I’d buy the Aston Martin every time. It has the brand, the pedigree and the price tag. If my wallet persuaded me to buy the Jaguar I would still have an amazing car that did anything I was likely to want to do… but I would always know that it wasn’t an Aston Martin.

And what would happen if you took the badges off the two cars? Is one truly superior to the other? If you drove one after the other I have no doubt you could tell the difference between the two but the truth is… the prestige has a huge influence on how the car makes you feel and, in turn, how you drive.

You genuinely can tell the difference between the Hard Wired Tiny Terror and the Chinese made version when they are side by side. But, let’s make no bones about it… a large part of my reason for desiring the Hard Wired Edition is that it is made by hand in the UK in limited numbers by a handful of people. It’s part of our musical heritage. It is definitely better but… more importantly… It’s SPECIAL… (and I want one).

We suspect Orange know exactly what they are doing by covering both bases in their Tiny Terror range. Hats off and forelocks tugged!!

We would love to hear your comments! 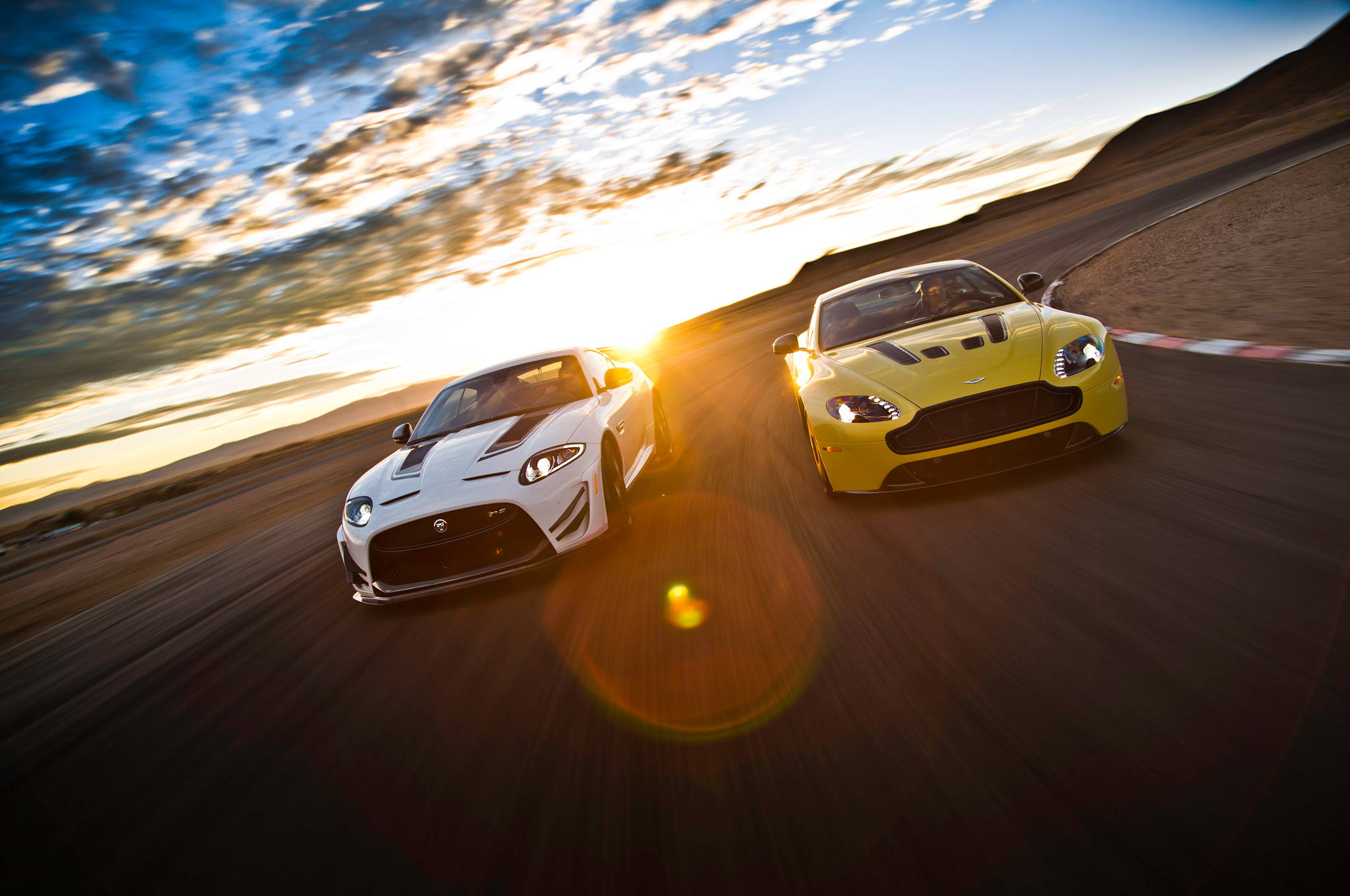